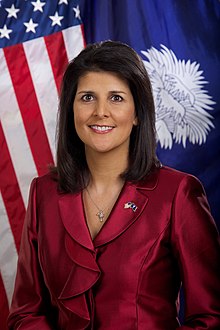 Why She’s Earned Our Notice:
On January 27, 2017, Namrata Haley, better known as Nikki, became Trump’s U.S. Ambassador to the United Nations. In her new role, she’s responsible for protecting U.S. interests at meetings of the United Nations. Nikki Haley previously served as the Governor of South Carolina. She’s one of only two Indian-Americans in U.S. history, and the first woman in South Carolina, to hold a gubernatorial position.  In 2016, Time magazine singled her out as one of the year’s most influential people.
Personal Life and Education:
Born January 20, 1972, Nimrata Randhawa is a second-generation Indian-American. Her father, Ajit Sing Randhawa, worked as a professor at Voorhees College. Her mother, Raj Randhawa, would go on to open her own clothing shop in 1976. At the age of 12, Haley started to help out in her mother’s clothing shop. The Economist characterized Nikki Haley as “an extreme watchfulness about overheads and a sharp aversion to government intrusion.”
Nikki Haley graduated from the local Orangeburg Preparatory Schools in 1989. After that, Nikki enrolled at Clemson University to complete a B.S.in accounting. In 2015, the University of South Carolina granted Nikki Haley an honorary doctorate in public service. As governor, Haley supported a variety of initiatives meant to improve school performance.
While raised a Sikh, Haley converted to Christianity in1996. She’s currently married to Michael Haley and mother to two children.
School Profiles: